Her weekly radio show  The Housecrunch with Terri B!, still reaches at more than 2 million listeners globally each month aired on various FM and Internet stations.

With regular contributors such as Italian producers Gabry Sangineto, & Sergio Matina and George Von Liger the soulful house show was already labeled Soulful during the  early 2000s and she has never waited for the trend.  She has been house, loved house and remains house.

With a 1,000 plus roster of singles and remixes, she is on fire  in her dance music career and remains one of the relevant vocalist and now influential music producers, and radio host.  The show features the best in classic house, soulful house, tech and disco house music.

Terri’s personal show is remains true  to classic soulful house and disco house. Her shows have been downloaded more than 32,000 times. 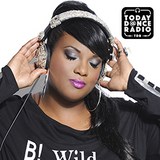 The Housecrunch Radio Show with Terry B!