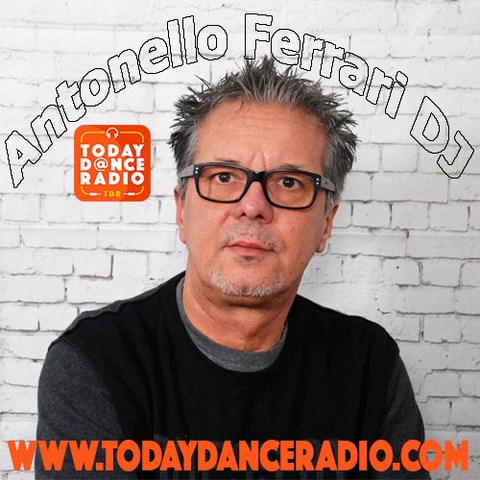 Antonello Ferrari started his career as a DJ in 1979 playing funky soul music in the most famous nightclubs of Turin (Italy) such as Divina, Privè, Wisky Notte, Lido Wisky, Patio, Nepentha, Heaven, Jumping Jack, Casanova etc.
In the meantime he had his first working experiences as a speaker and presenter for Radio Torino International, RadioCentro95 and G.R.P.
In 1982 he became resident DJ of the well-known nightclub Chez-Nous in collaboration with Radio 105 Network, thanks to which he took part in several events organized in the disco "Vogue" in Milan and Turin.
From 1984 to 1989 he joined the working group of RV1 Black Radio and was responsible for the dance department with a programme of music reviews, interviews, guest DJ set on Saturday night.
In 1987 he was resident DJ in the disco Hennessy, the focus of Turin nightlife participating in social events in cooperation with the best restaurants in Italy (Paradiso, Villa delle Rose, Prince, Petern Pan, Byblos, Pacha, Divinae Folliae etc.).
Since 1992 some of his various productions have been released by the most prestigious Italian labels such as D-Vision, UMM and Undiscovered .
In 1993, after the poll "I big di Torino Sette" and with more than 5.000 likes, he was rewarded by the Turin newspaper "La Stampa" as the best dj.
In 1995 the project called "The Groovers" with the single entitled "Ride on the power" achieved a great success and feedback according to sales, mainly thanks to his work on live radio programmes.
In 1996 the project called "HearthRhythm" opened the international stage with the single entitled "You gotta move". The song was released in the UK where it entered the most world famous house charts together with the versions edited by Boris Dlugosch for Peppermint Rec.
Since 1990 he has been invited as special guest in prestigious nightclubs of Rimini such as Prince, Pascià, Heaven, Villa delle Rose.
You can listen to "Studio 54" the mixed Antonello Ferrari on Today Dance Radio from Wednesday to Friday at 23:00 (Timetable in Italy),  60 minutes with the history of disco dance music.
Listen to Today Dance Radio